Having recently eaten at a raw food restaurant, I was fascinated by the creative dessert options.  It seemed impossible to me to eat anything other than fruit, vegetables, and nuts; which I believe would get boring after about two days, or for the less controlled, five hours.

I was awed and inspired by the creativity I discovered perusing the blogs and Pinterest boards.  A lot can be done with fruit and nuts!

Please note that I in no way endorse any kind of raw diet, and would caution against assuming a raw diet for health purposes.  Eating only raw foods can actually inhibit both digestion and nutrient absorption, so please check out some real science before giving up cooked food forever.

Cashews seem to be a raw food miracle and key ingredient in many vegan desserts.  I decided then to experiment, and what I emerged with was a kind of  “cheesecake” made with cashews and figs.

It’s no coincidence that I call this cheesecake, because this tastes almost exactly like cheesecake.  In fact, after tasting a bite of this I decided I might be  able to replace real cheesecake with this version occasionally, which is a big feat, as cheesecake has been my favorite dessert since I was six. 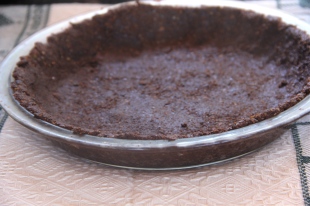 Blend all ingredients in a food processor until mixture forms sticky chunks on the edge of the blender that can be worked into a ball.  Using your hands work the dough into a glass pie pan so that a layer of about 1/2 inch covers the pan.

Starting with the soaked cashews, blend all ingredients in the food processor on high, until a smooth pinkish cream forms (5-10 min).  Spread cream over crust layer and refrigerate for at least an hour before serving.