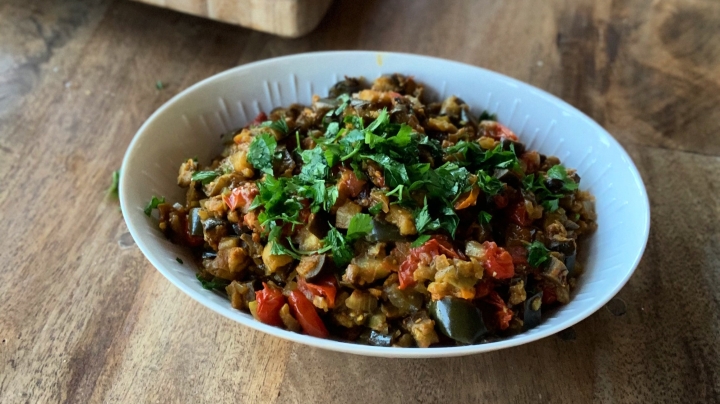 Welcome back to another episode of Food Science Fridays.  Today we’re talking all about the eggplant or aubergine as others around the world call it.  Until a few weeks ago eggplant was my favorite vegetable, when I found out it’s a fruit.  Yep apparently eggplant is a fruit.

Eggplant not a lot of people’s favorite fruit or vegetable, although the emoji apparently is very popular. People often tell me aubergines are too bitter or the texture too spongey, but I’m here to tell you that it doesn’t have to be.  Eggplant when prepared properly should be mild in taste and soft in texture.  So, let’s break it down, before we make one of my favorite eggplant dishes.

While there are many types of eggplants, most of them are some shade or variation of purple, and this is due to the presence of anthocyanins, which are members of the flavonoid group of phytochemicals, and are often responsible for the colors red, purple, and blue in many fruits and vegetables.  Anthocyanins are phenolic compounds and are responsible for both the bitter taste of eggplants and the browning that occurs rapidly when the eggplant is cut.

When you cut an eggplant, the enzyme polyphenol oxidase converts the phenolic compounds into quinones, which can then polymerise.  This is why eggplant will brown rapidly when cut.

To prevent your chopped eggplant from soaking up a lot of oil and also the enzymatic browning reaction, try salting your eggplant and letting sit for 30 minutes.

Salting draws water from the eggplant cells through osmosis, filling the air pockets and collapsing the sponge structure.  This allows you to cook in less oil, and will also speed up the cooking time.